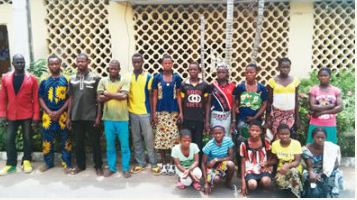 Four notorious suspected human traffickers have been caught by the Immigrations Service, Oyo State Command, while allegedly attempting to smuggle a nursing mother along with her two-year-old son, nine girls, and a boy.

The suspects and their victims were apprehended at the Saki border, in Oke-Ogun area of Oyo State. The four men were accused of involvement in a trafficking ring which was responsible for bringing in several foreigners, notably Beninois and Togolese, into the country without travelling documents.

Comptroller of Immigration, Oyo State Command, Innocent Akatu, said the victims were usually sold into slavery where they would work on large farmlands and local markets in the area. He also said that some would be used as housemaids, not ruling out the possibility of involving the illegal aliens in prostitution rings by their traffickers.

“It’s a continuous exercise and a menace we will like to trash. They were arrested at our border post in Shaki area of Oyo State on Monday while trying to enter Nigeria in different batches. They are from Togo and Benin Republic and after interrogation, we found out that they had entered Nigeria illegally. We will hand them over to the National Agency for Prohibition of Traffic in Persons for appropriate measure. There is the need to sensitise the public on the evils associated with child trafficking. Some of these people are young children of eight years old.”

One of the suspects, Pascal Musa from Benin Republic, said he was a farmer in Iseyin and that he brought the nursing mother, Sambiani Melane, 20, her 13-year-old sister and two other girls to Nigeria to work in restaurants and farms.

He said, “I did not obtain necessary papers before bringing them in to the country because I did not know that it was wrong. We were caught in a bus after crossing to Nigeria. I told them we were going to Nigeria and that the people with me were also going there to look for work in Iseyin. I came with four people. One of them has a baby but I took permission from her parents before bringing her here. She was not living with the father of her baby because they were not married. I intended to take them to Toluwaloni where food is sold.”

Melane told our correspondent that the father of her son did not marry her and that he was aware of her sojourn in Nigeria with the child.

She said, “He impregnated me in our house but we are not married. He knows that I was coming to Nigeria to work. I was not promised any money yet because we were yet to enter Nigeria when we were caught. I am a trained fashion designer at home but there is no work. I have never been to Nigeria.”

Kofi Musa is a father of 11 children with his wife pregnant with their twins. He has been in Nigeria for 12 years. Like his kinsman, Musa, he is also a suspected human trafficker who has allegedly brought in several foreigners to Nigeria.

He said, “I have been farming in Iwere-Ile area of Oke-Ogun for 12 years. I got married there and I have 11 children. I was caught with three children but I have others working with me in the farm. I promised to pay the money of those I was caught with to Zan, the father of two of them. The father of the last one has travelled to France. He said I should take care of the child in his absence, so I brought him to Nigeria to work on the farm. On each child, I collect N8,000 per month from those who seek their services.”