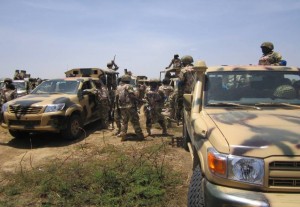 The Director of Defence Information, Maj. Gen. Chris Olukolade said a combined operation of Air Force and ground forces have dislodged terrorists from more communities in Borno and Yobe states.

According to him, the Air Force had carried out several attack missions on identified terrorists camps in the operational areas, with ground forces following up with mop up operations in the areas pounded by the Air Force planes.

“Air Force pounding of identified terrorists’ hideouts is continuing in some locations in Yobe and Borno states as part of ongoing campaign against terror.

“Several sorties are being flown either in conjunction with ongoing ground assault by troops or to dislodge any concentration of terrorists as follow-up to intelligence reports.

“Simultaneous mopping up operations are also ongoing in the areas already operated upon by Nigerian Air Force,” he said.