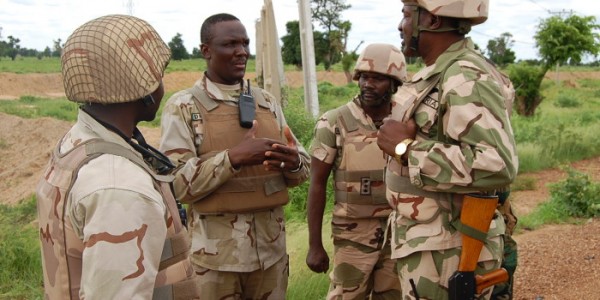 After more than 48 hours of intense battle against Boko Haram fighters, Nigerian troops yesterday took over Bama, the second largest town in Borno State after Maiduguri, the state capital.

This brings to 36 the number of towns that have been recaptured from Boko Haram since the commencement of a four-nation military offensive, coordinator of the National Information Centre, Mike Omeri told AFP.

Several towns and villages including Gamboru, Ngala, Kala-Balge, Marte, Abadam, Monguno, Kukawa, Damasak, Mafa and Dikwa have been liberated in the past three weeks, some by regional troops and others by the Nigerian military.

You may recall that Bama town fell into the hands of the insurgents in September 2014, which saw troops of the 202 Tank Battalion, the first class emir and thousands of his subjects flee to Maiduguri.

“Bama is here and our next prize is Gwoza; surely, Shekau is within reach”, a military officer said.

A top security source, who confirmed the development, said the big story about the recapture of Bama was the liberation of hundreds of people, especially women and children, who were held hostage in various places, including the army barracks, the prisons and the emir’s palace.

The source said contrary to earlier reports suggesting that the town was liberated on Tuesday, it was around 12.30 pm yesterday that the terrorists were overpowered.

He said between Monday and Tuesday, a serious operation was carried out by fighter jets, which cleared the terrain for ground troops to make an incursion.

Another source said most of the women and children liberated in Bama are malnourished and need special attention.

“Many of them are malnourished, some have cough, especially children. Besides liberating the town, our personnel are also intervening in the area of providing health services to the victims”, he said.

He, however, said it would take long time for Bama to be safe for occupation by its people.

“A lot of destruction has taken place and all these need to be addressed. We must also clear the town of explosives that were buried in various places. There are corpses also…All these are serious humanitarian issues”, he said.

Crucial “co-operations and alliances” have led to victories over the Islamist rebels, he said, thanking Cameroon, Chad and Niger for cutting off “the supply lines of the terrorists”.

“It is hoped that the unfolding regional cooperation will hasten the total defeat and extermination of Boko Haram in Nigeria and the sub-region”, he added.