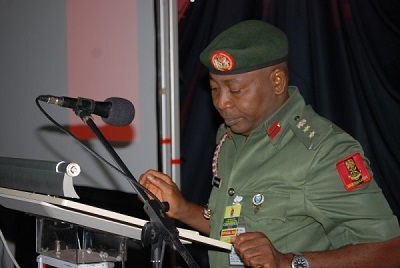 The Acting Director, Army Public Relations, Col. Sani Usman, who gave the cheery news in a statement on Saturday, said that Mafa and Marte were liberated by troops on Wednesday and Friday respectively.

Usman said the soldiers recovered large cache of arms and ammunition, including anti-aircraft guns from the insurgents.

The Army spokesman added that the troops had started a cordon and search as well as mopping up operations in the two LGAs.

He added that the military is making efforts to recover more territories from the insurgents.

He said, “In continuation of our avowed recovery of territories held by Boko Haram insurgents, the Nigerian military recaptured Mafa and Marte Local Governments Areas of Borno State on Wednesday and Friday respectively.

“During these operations, the gallant and courageous troops recovered a large quantity of high-caliber arms and ammunition, including anti-aircraft guns from the insurgents.

“It is significant to note that our troops did not suffer any casualty during these operations. Presently, troops are conducting cordon and search and mopping up operations in the recovered territories, while effort is ongoing to recover more grounds from the fleeing terrorists.

Usman stated that international routes from Nigeria to Cameroun, Chad and Central African Republic had been secured with the liberation of the two local government areas and the presence of the Chadian forces in Dikwa.

He noted that the military’s successes had enhanced the security situation in the areas with bold indications of the high possibility of restoration of the international trade and socio-economic activities along the corridor.