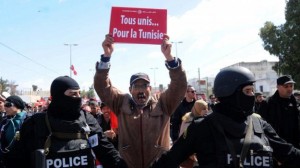 Thousands of demonstrators have taken to the streets of Tunis for an anti-terror march. The demonstrators were chanting “Tunisia is free! Terrorism out!” they marched to the Bardo Museum, the scene of an attack in which 21 tourists and a Tunisian died. BBC reports:

French President Francois Hollande and other world leaders attended a ceremony at the museum.

Hours earlier, Tunisian authorities said that they had killed one of the prime suspects in the attack.

“The Tunisian people proved today that they do not bow to terrorism, and that as one man and one woman, they defend the nation. When Tunisia is targeted, the whole nation stands as one.”

Gunmen stormed the museum in Tunis on 18 March. British, Japanese, French, Italian and Colombian tourists were among the dead.