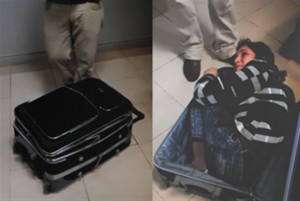 Customs officers at a Turkish border crossing searched a Georgian man’s luggage and discovered an unusual piece of cargo — his girlfriend. UPI has details:

The Turkish National Police said customs officers at the Sarpi Border Crossing noticed a 25-year-old man, identified by the initials Z.Z., acting suspiciously Monday while waiting to enter Turkey and they asked him to open his large suitcase.

Police said the man opened the luggage, revealing his 22-year-old girlfriend, identified as D.K., curled up inside the bag. Investigators said they questioned the duo and discovered the woman had previously been banned from crossing the border into Turkey. The couple were deported back to Georgia.

The suitcase method was also employed earlier this month by a Russian woman attempting to cross into Poland by hiding in her French husband’s bag. That woman was also discovered by authorities and she and her husband were arrested on a charge of attempting to evade border control.