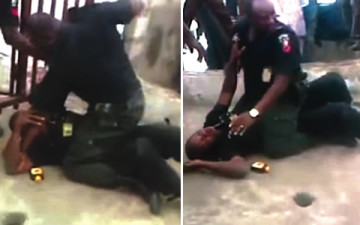 For dragging the image of the Nigeria Police in the mud, two policemen, who were recently caught on video fighting in broad daylight, will be arrested, investigated and dismissed, the Force headquarters has said.

The Force Public Relations Officer, DCP Emmanuel Ojukwu, who was reacting to the embarrassing video on Sunday, said that the men would face orderly room trial for their conduct.

“We have seen the video and I can tell you that the men would be identified and apprehended to face disciplinary action. They will face orderly room trial and they will be dismissed”, he stated.

It would be recalled that a two-minute video uploaded to YouTube on Friday by Sharebitmag with the caption “Two Nigeria police caught fighting in Lagos”, went viral with majority of Nigerians condemning the show of shame.

The incident, which took place at the entrance of a bank, showed a mobile policeman in his uniform sitting atop of another of his colleague, also dressed in uniform, and pummeling him while a third policeman attempts to intervene.

Though the video did not show the origin of what led to the brawl, the second policeman appeared to have been floored, as he did not return any of the blows.

A small bottle of popular herbal alcohol beverage, Alomo Bitters, was seen on the ground next to the men. 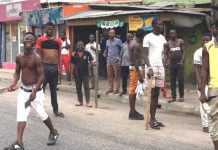