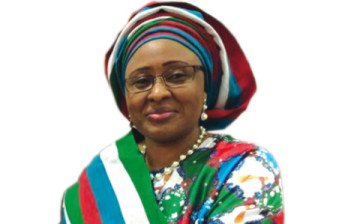 Two suspects arrested in connection with the alleged attack on the convoy of the wife of the All Progressives Congress (APC) presidential candidate, Aisha Buhari, during her visit to Kwara State over a week ago, have been remanded.

The suspects – Sulaiman Lawal (27) and Lukuman Isiaka (20) – were remanded in prison custody on the orders of an Ilorin Magistrate Court on Monday.

They were arraigned on a five-count charge of criminal conspiracy, mischief, belonging to gang of thieves, extortion, assault and disturbance of public peace contrary to sections 97, 327, 306, 292 and 113 of the penal code law.

According to the Police First Information Report (FIR), Messrs Sulaiman and Lukuman attempted to extort money from Mrs. Buhari, who was accompanied by wife of the APC Vice-Presidential candidate, Mrs. Dolapo Osinbajo and Kwara first lady, Mrs. Omolewa Ahmed, while they were on their way from the palace of the Emir of Ilorin after paying homage to the traditional ruler.

The report added that the suspects and others at large “criminally conspired in an attempt to extort money from them and in the process, they smashed the side mirror of a car in the convoy and for a while caused pandemonium in the area”.

“Investigation at ‘C’ division police state later revealed that the two of you are group of social miscreants who used to extort money from passers-by at Ile-film junction, Ilorin”, the FIR said.

Opposing the bail application of the accused, the police prosecutor, Godwin Azua, said with the rampant nature of the charges preferred against them, if granted bail, they would tamper with the on-going investigation of the police.

However, the Defense Counsel, Taofik Olateju, urged the court to grant bail to the accused, arguing that in the eyes of the law, they were presumed innocent until proven guilty by a court of competent jurisdiction.

After hearing the arguments from both sides, presiding Magistrate Jubril Salihu ordered the accused to be remanded at Oke-Kura prison custody, Ilorin and adjourned the matter till April 2 for further mention.