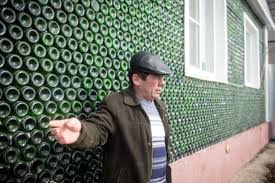 A man in Russia’s Chelyabinsk region recently made the news recently, after it was reported that he built the walls of his house by using 12,000 champagne bottles. OddityCentral has more:

52-year-old Hamidullah Ilchibaev has always been interested in constructing things out of beer and vodka bottles, but it wasn’t until he lost his 18-year-old son that he began working on his greatest project – a glass bottle house. His son had always admired his work and pushed him to build a house someday, so he decided to go ahead with the idea, in his memory. Over the course of three years, he managed to collect 12,000 champagne bottle of various shapes and sizes.Some he purchased at a ruble apiece, and others were donated by nearby restaurants.

“When I started to build, I hadn’t even imagined that there are so many different kinds of bottles of champagne,” he said. He discovered that the bottles not only varied in color, but also quality. The bottles he finally collected were of different shapes and sizes, so he used a special glass cutter to cut the tops off to the same size.

He made use of these bottles as one would bricks, stacking them up around a solid foundation. Between the insulation and the neck of the bottle, he left a gap of the thickness of a finger, into which he poured a solution that when solidified firmly holds the bottles in place, and keeps the house warm as well.