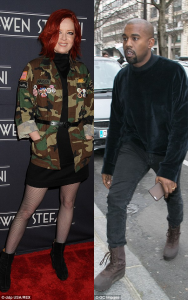 As years go by, Kanye West has continued to gather more and more enemies, and I am not really surprised.

His on and off war with Rock singer, Shirley Mason is back on again.

She blasted Kanye West over his Grammy  attitude against Becks, Kanye sent her a private mail, and she replied again.

Read her open letter below: –

“Dear He who shall remain nameless,’ ‘It is with great sadness that I read your email today’

“What alarms me more than anything about your nasty little barbs is that you are in the business of representing artists interests and yet you are clearly unaware that not all musicians are obsessed with the charts or being famous.

“That some of us do not value ourselves by the number of mainstream ‘hits’ we have enjoyed.

“That some of us just enjoy making music and having a long lifespan of a career without having to dance as fast as we can, or be the loudest clown in town or be having to hitch ourselves to the latest, greatest, freshest sound in order to remain ‘on top.”

“There are even some of us who do not believe that being famous is the holy grail or the answer to a beautiful, meaningful and rewarding life.Clearly you are unable to wrap your head around the idea that some musicians actually prefer NOT having to perform on Children’s TV shows.

“So allow me to make my choices as I see fit without having to endure your childish and un-evolved criticism.  As you so rightly pointed out, there are plenty of talented people in the world who will sell their grannies to serve your desires.