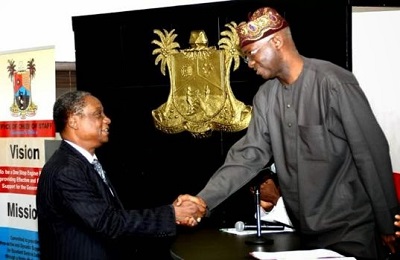 The tribunal of inquiry into a road traffic accident and the consequent arson and vandalism of Bus Rapid Transit (BRT) vehicles on July 4, 2014 in Lagos State, on Monday submitted its findings to Governor Babatunde Fashola, accusing soldiers of perpetrating the act.

It would be recalled that on September 8, 2014 the Lagos State Government inaugurated a three-man tribunal chaired by Justice Ebenezer Adebajo (retd) to investigate the cause of the incident which occurred at the Palmgrove axis of Ikorodu road in the state.

Adebajo, while reading the tribunal findings yesterday, said, “The accident occurred on July 3, 2014, when a soldier – late Lance Corporal Matthew Ishaya – ran his motorcycle, with registration number, MUS-565 QB, into a stationary BRT bus, MO63, at the Palmgrove bus stop on the Ikorodu Road”.

He noted that the accident occurred outside the BRT corridor, adding, “the soldier caused his death”.

Explaining how the accident occurred, the chairman said, “The BRT was stationary on the highway as a result of low fuel supply. The BRT bus was left on the highway longer than necessary.

“The late soldier rode his motorcycle without a helmet. This action is against Section 3 (3) of the Road Traffic Law 2012”.

The retired justice stated that the discovery of Ishaya’s corpse on July 4, 2014, led to the mayhem.

He said, “Extensive vandalism, burning of BRT buses, destruction of personal phones, harassment of innocent citizens which followed the death of the soldier were caused by soldiers of the 9th Brigade of the Nigerian Army, Ikeja Cantonment.

“For perpetrating this act, the tribunal has recommended that apology should be demanded by the Governor of Lagos State from the Nigerian Army. The Nigerian Army should, on behalf of the 9th Brigade, Ikeja Cantonment, Ikeja, apologise in writing to the people of Lagos State. And it should be published in at least two national newspapers”.

“The protection of life and property remain the principal reason for government’s existence. Whenever such occurrence that happened on July 4, 2014 occur, we must do everything to ensure that they it doesn’t occur again”.