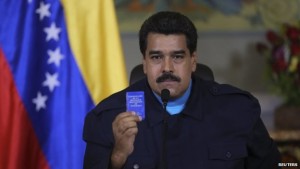 The President of Venezuela, Nicolas Maduro has called the latest US sanctions “the most aggressive, unjust and harmful step that has ever been taken by the US against Venezuela”. BBC was there:

In a televised address, Mr Maduro named one of seven officials sanctioned by the US as his new interior minister. He also announced he would seek special powers from the National Assembly “to defend the integrity of the country”. Tensions between the two countries have been rising for months.

On Monday, US President Barack Obama issued an executive order freezing the assets of seven Venezuelan officials and banning them from entering the United States. Mr Obama also said the situation in Venezuela, including “the government’s erosion of human rights guarantees (…) constitutes an unusual and extraordinary threat to the national security and foreign policy of the United States”.

He declared a “national emergency to deal with the threat”. In response, President Maduro accused Mr Obama of “personally taking on the task of defeating my government, intervening in Venezuela, in order to control it from the US”.

He also said he would ask the National Assembly on Tuesday to grant him special powers to “fight imperialism”. Mr Maduro did not specify what powers exactly he would ask for, except to say he would propose a “special enabling law to defend peace”.