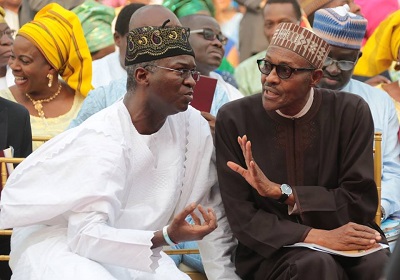 Governor of Lagos State, Mr. Babatunde Fashola, Thursday, charged Nigerians to vote out the All Progressives Congress, APC, presidential candidate, Gen. Muhammadu Buhari (rtd.), if he fails to live up to expectation in his first term, if he is elected president come March 28, 2015.

Fashola, who spoke at an interactive session Buhari had with youth groups and students at the Muson Centre in Lagos, also urged the youths to defend their votes, which he said did not mean fighting and being violent, but to wait until their votes were counted.

Noting that the time had come for people to vote for performance, Fashola argued that thosw ho were given the mandate and failed to perform should be shown the door through the ballot box.

“Vote and defend your votes. It does not mean you should fight. Wait until your votes are counted. Nobody, armed or unarmed, has the right to stop you from voting. It is your right”, he said.

Fashola wondered why a federal government that promised to improve technology would be strongly opposed to the use of card readers for elections. He then asked why it supported issuance of Permanent Voter Cards, PVCs, in the first instance.

The governor urged the youths to know that this was the best time to change a poor-performing federal government, adding that by so doing, they would make history as the first generation to have changed a bad government through the ballot box in Nigeria.

“If you agree that your country is not doing well and you want to change it, it will be the first time a bad government is changed by the people in Nigeria. If you elect Buhari and Osibanjo, you will have succeeded in changing a bad government and if Gen. Buhari and Osinbajo did not perform, you should vote them out”, he said.

While stressing that integrity and untainted records were the bedrock of the Buhari/Osinbajo candidacy, the Lagos governor pointed out that, “I have said this to help you make informed decision and not on the basis of what your friend chooses. Buhari is contesting because past leaders have failed to keep their promises”.