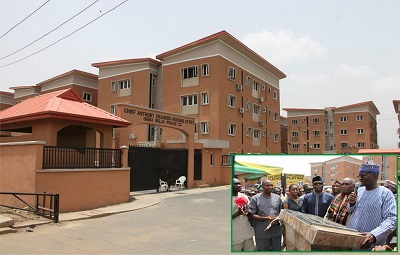 Fashola, who was speaking at the premises of the 240 housing units, lamented that the housing deficit in the country forced the state government to embark on the Lagos Home Ownership Mortgage Scheme, Lagos HOMS, aimed at addressing the shortfall.

The governor said “aside this, we are constructing houses in 26 different places across the state. Some of the places are Ilubirin, Ilupeju, Ajara, Sangotedo, Igando, Magodo, Omole, ketu and others”.

Fashola noted that project delivery has served as utmost difference between the Peoples Democratic Party, PDP led-Federal Government and states governed by the All Progressives Congress, APC.

According to him, “The difference between the central government and the Lagos State government was that everyone could see our housing projects but no one has been able to access their mortgage scheme. Ours was delivered on a 10 years mortgage on 9.5 percent interest”.

Gov. Fashola added that the state could account for every kobo spend on projects “But the central government cannot account for $20 billion”.

On why his government decided to name the estate after Enahoro, he said “The democracy we all enjoyed today was fought by some people. Some lost their life. Many were unable to spend time with their family because they were concerned about the freedom and rights of the public”.

Enjoining Nigerians to emulate their courage, Fashola said “They could have sat down on the fence and pretended that all is well. But they spoke up. They were brutalized for agitating for the right of Nigerians. And today, we are all free. If you remember the struggle of those people, you will understand that this was why we all have liberty”.

The governor explained “And one of the people who fought for the democracy we all enjoy today was late Chief Anthony Enahoro. Today, naming this estate after him symbolized his struggle for Nigeria”.

Fashola, however, raised the alarm over plans to truncate the country’s democracy, saying “Some people who couldn’t understand the sacrifice made by late Chief Anthony Enahoro and others are threatening that democracy”.

Responding on behalf of the Enahoro’s, the immediate brother to the late nationalist, Prince Micheal Enahoro, commended the Lagos State government for the gesture, adding “it is out of this world [to] bestow this on my late brother”.