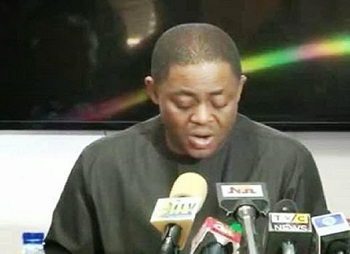 The Peoples Democratic Party Presidential Campaign Organisation, PDPPCO, on Monday vowed to resist with everything at its disposal, rigging of the recently concluded presidential election.

Its Presidential candidate, Dr. Goodluck Jonathan, is currently getting a run for his money from the All Progressives Congress flag bearer, Maj. Gen. Muhammadu Buhari (retd.) for the coveted position.

The Director of Media and Publicity of the PDPPCO, Chief Femi Fani-Kayode, stated this at a press briefing in Abuja on Monday.

According to the PDP campaign spokesman, based on the information made available to the party, President Jonathan was having a comfortable lead in the race.

He said, “We wish to take this opportunity to make it clear to the Nigerian public that according to the figures made available to us, we are ahead in the presidential elections by at least two to three million votes.

“We have our own Situation Room and we have collated all our figures from the various polling booths, wards, local government areas and states in the Federation.

“Despite the propaganda of the opposition, we are confident of victory. They and all other stakeholders can be rest assured that we will accept nothing less than the announcement of an election result that is truthful and that reflects the true will of the Nigerian people”.

He, however, warned that “Any attempt to manipulate figures or to rig us out from any quarter, will be firmly resisted”.