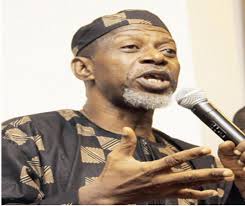 Nigerian poet, Odia Ofeimun wants Attahiru Jega, chairman of the Independent National Electoral Commission (INEC) sacked as he noted that Jega has shown that he is not capable of conducting a decent election.

“Before the elections were postponed, the umpire had assured Nigerians that he was ready, only for everyone to discover that about 23 million, one-third of the people that were supposed to vote, had no voters’ card,” Ofeimun told SaharaTV on the sidelines of the 8th Pan African Congress held in Ghana.

“The fact that the electoral commissioner can make such a public comment in my view meant that ought to be sacked.

“If it holds on March 28 without the proper resolution of proper disenfranchisement of so many Nigerians, I will continue to say for the rest of life that it was a rigged election. The reason is this, the card readers makes rigging impossible. Look, if you want to distribute voters cards in 10 days, it is possible because when they are doing census, they have enumerators who go door to door. Why can’t INEC do it?

“In my own part of Lagos, you need only about 2 enumerators; they will go from house to house. You know how I got my own card? Somebody who has seen it told me about it and another one brought it for me. What that tells is that it was actually possible for a distribution to have taken place and the man who brought me the card has exposed one edge of the problem and that problem is that anybody can go there and collect the voters’ card.

“What that means is also that politically interested Nigerians actually prevent those cards from being distributed were their parties are weak and that for me is a serious matter. And that for me is exactly what Jega should have avoided.

“What makes it painful is that opponents of Jega have been saying he surrounded himself with people of particular ethnic colour. Then he moved beyond that, he created so many more polling booths in an unusual way. A larger one to one part of the country and a smaller part to another part and people were already complaining about this before this misdistribution of PVC where in one area had 80.1 distribution and places that were at peace had 40 and 38 percent distribution,” the poet noted.