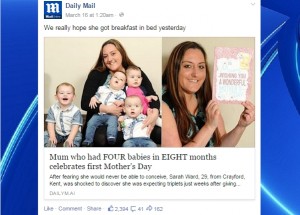 A woman in the United Kingdom, has her hands full after she gave birth to 4 babies within one year as a result of two pregnancies. Scoop has more:

29-year-old Sarah Ward became pregnant with triplets one month after giving birth to her first son. Ward gave birth to her triplets 7 weeks prematurely when her oldest son Freddie was only nine months old. Ward from Crayford, Kent, said that she now changes about 30 diapers each day of all her children.

Ward said that she had a difficult time conceiving her first son, so she was delighted to learn that she was pregnant again.  When doctors discovered that she was expecting triplets, they advised her to abort one of the fetuses to give the other 2 a better chance of survival.

However, Ward and her partner Benn Smith, 31, refused to so and decided to keep all three. They are now happy with their decision, as all three babies are healthy.