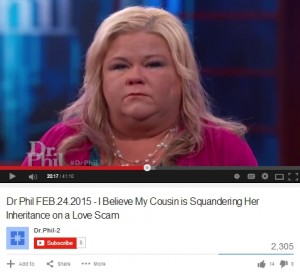 A woman is obviously being scammed as she is spending her entire inheritance of up to the tune of $1.42 million on a man she never met. Scoop reports:

A woman brought her cousin to Dr. Phil, because she is spending her entire inheritance on a man she never met. The cousin however, defended her decision to send $1.42 million to the man she met on the Internet, saying that she is almost sure that he will pay her back. Sarah, 46, said that she got to know the man who calls himself Chris Olsen, 18 months ago. He said that he was stuck in South Africa, after arriving there on a business trip.

Olsen told Sarah that several things came up, which keeps him from returning to the United States. Olsen also revealed that he is a widower and he has two daughters. He was born and raised in Milan, Italy, and moved to the United States about 18 years ago.

Crystal was worried that her cousin was wasting her vast inheritance money, sending it to the man she had never met, so she asked Dr. Phil for help. Sarah has sent so much money to South Africa, that Western Union has banned her from sending any more cash. Sarah now relies on family and friends to send money to Olsen on her behalf.