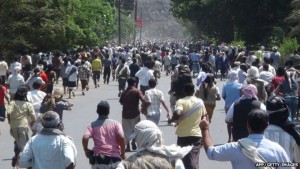 The President of Yemen, Abdrabbuh Mansour Hadi has fled his palace in Aden as Houthi rebels advance towards the city. BBC has more:

Gunfire could be heard around the city centre, and security forces allied to the Houthis are reported to have taken over the international airport. On Wednesday morning, the rebels moved to within 60km (37 miles) of Aden after seizing the country’s largest air base.

Government officials later said the president had been moved to a “secure location” but had not fled the country. The Reuters news agency reports that Aden residents attempted to storm an army barracks to obtain weapons before being repulsed by troops.

Meanwhile, sources in neighbouring Saudi Arabia told Reuters that there were no plans for military intervention in the crisis, and that the build-up of military forces on its border with Yemen was “purely defensive”. Mr Hadi took refuge in Aden last month after fleeing Sanaa. He had been placed under house arrest when rebels captured the capital but escaped.