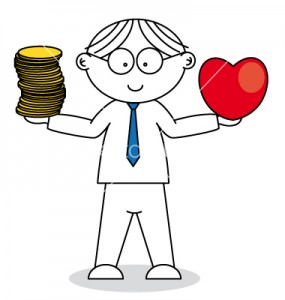 I have heard countless conversations between people about how much they rely on their significant others when it comes to finances.

When I say “significant others,” I’m not talking about husbands and wives; I’m talking about boyfriends and girlfriends in their mid-20s.

Maybe you haven’t realized this, but most people in their mid-20s don’t even have enough money to support themselves, let alone another person. It’s 20-f*cking-15 already — it’s time to own up and pay for your own sh*t.

Isn’t it more gratifying to treat yourself than to let someone else always cover the bill? Why is it someone’s “job” to pay for another person just because he or she is in a relationship? What’s the point of having a job if you aren’t even going to use your salary for the right reasons?

I’m not saying don’t treat your significant other from time to time or even often — but if finances are what drive you to be in the relationship in the first place, you need to reevaluate your situation.

Money has and always will be one of those tiptoeing-around subjects, which is why keeping it out of your relationship (to a certain extent) will only benefit you in the long run.

So if you still aren’t totally convinced finances should be toward the bottom of your priority list, here are 18 reasons that will hopefully change your mind…

1. You have no money
If there’s one thing most Millennials can agree on, it’s the fact that WE ARE BROKE. Sure, we may be able to pay our bills, but after the fact it leaves us rent poor, utility poor and food poor.

3. A salary doesn’t define a person

Just like numbers on a test don’t define your true intellect, the numbers on a paycheck have absolutely nothing to do with the person you are in your relationship.

You can run out of tangible items, but you really can’t run out of the feelings that are present in your relationship.

Well, you can, and you may… but not as fast as the money would be gone…

5. Dollars can’t buy love
Money can’t buy happiness, and if you think otherwise, you better pray your significant other doesn’t find out because that’s some f*cked up sh*t.

6. It’s awkward enough asking your friends to pay you back
Money is always a touchy subject, which is why we walk on eggshells when reminding friends they owe us money.

Bringing that into an intimate relationship is just a recipe for disaster.

7. You won’t remember what you spent on a memory
Science actually confirms that people who spend money on experiences instead of things are much happier.

8. You don’t share a job, why would you share a bank account?
You didn’t earn that money, so why would you think you are entitled to it?

If your partner chooses to share it with you, then great, but if he or she doesn’t, also great. Why? BECAUSE IT ISN’T YOURS.

9. Money isn’t a determinant of what you bring to the relationship
You should be much more concerned about what personal characteristics and good qualities you can bring to the table rather than your paycheck.

10. Your heart doesn’t live in your wallet
It lives in your pants… just kidding, but maybe only a little…

11. You shouldn’t be able to be bought
You can’t put a price on the value of a person, and you really shouldn’t try. Why? Well…

12. Money brings out the ugliness in people
If you want to see a person’s true colors, see how he or she reacts in situations with money.

Whoever places money on the top of his or her priority list is not a person you want to be wasting your time with.

What happens when the real sh*t happens? How can you trust someone who is so easily persuaded by a dollar sign?

13. Love is a feeling, not a material item
Which is exactly why you don’t need to mix it up with money.

14. You can’t keep tabs on a relationship
The whole “I paid for this, you paid for that” gets confusing and really never ends up in an even payout.

15. Green is never a good color on anyone
Money really does bring out the worst in people, which is why it’s sometimes better to avoid the situation altogether.

You don’t want to be known as that person who lives his or her life chasing dollar signs.

17. Getting paid for sex is prostitution
Don’t be sleeping with someone just for the financial benefits; technically it’s illegal, but hey, who are we to judge?