Reports emanating from Kano indicate that 5 passengers in a taxi were believed to have died Sunday evening when a pedestrian bridge under construction on Sheik Jafar road collapsed on the moving cab.

The pedestrian bridge which is located at Karshen waya by Gidan mai was designed to check and limit risk associated with pedestrian crossing at the heavily populated Doroyi suburb.

According to an eyewitness, Salisu Ibrahim who reported the incident to Vanguard, said that the unexpected tragedy occurred around 5.00 pm today.

Ibrahim revealed that the taxi cab had five passengers including the driver, adding that “It would be miracle if any passengers survived this accident”. 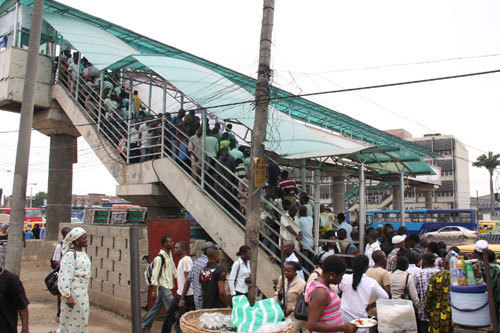 He further disclosed that the passengers were trapped; pointing out that it would take a crane to rescue the battered automobile and its occupants.

When contacted, the police Image Maker in Kano, ASP Magaji Musa Majia said that rescue effort is on to free the trapped passengers.

Pedestrian bridges are a common feature in cities across the world. These bridges are constructed to reduce the risk of accidents, save time that pedestrians waste by waiting for vehicles to speed past and equally offer beautiful sights in the environment.

However, there have been reported cases of these bridges constructed to reduce the risk of accidents malfunction, a more recent case is that which was reported in Imo State, as a pedestrian bridge built by Governor Rochas Okorocha at Heroes’ Children’s Park collapsed while the governor was on the bridge.