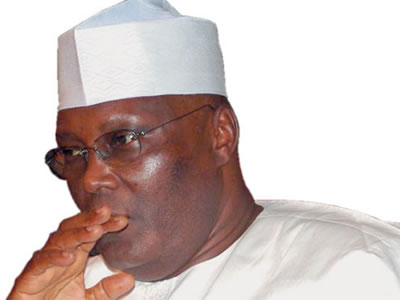 Former Vice President, Alhaji Atiku Abubakar, has dissociated himself from a purported photograph of him canvassing for votes for the Peoples Democratic Party Governorship candidate in Adamawa State, Mallam Nuhu Ribadu.

Atiku, in a press statement signed by his media office on Friday, said that the circulation of a photograph showing him carrying a banner asking for votes for the PDP candidate was a fraud done out of malice.

According to the statement, the banner in question was the banner the former vice president held in canvassing for votes for the Osun State governor, Rauf Aregbesola, during the last governorship election in Osun State last year.

The Turakin Adamawa, whose party, the All Progressives Congress (APC), was recently declared winner of the March 28 presidential election, said that the imperative of voting for the APC in the next line of elections in the country on April 11, is a task that he is firmly committed to, and to which he will urge all Nigerians to give unwavering support.

He said: “The purported photograph of me canvassing for votes for the PDP in the Adamawa governorship election is a fraud and done out of outright malice.

“I did not and will never call for support for any candidate of the PDP. The photograph that is being circulated is the Photoshop copy of my photograph that called for votes for the Osun State governor in the 2014 gubernatorial election in that state.

“My commitment to support and canvass for votes for the APC, not only in Adamawa State, but in all strata of elections across the country is a virtue that I will urge all Nigerians to follow”, he said.