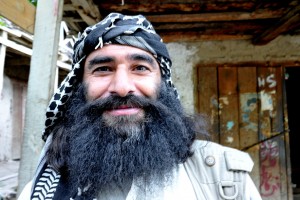 The Afghan Taliban have published a surprise biography of the reclusive Mullah Mohammed Omar, to mark his 19th year as their supreme leader. BBC reports:

The 5,000-word biography on their main website clarifies disputed facts about his birth and upbringing. It lists his favourite weapon – the RPG 7 – and says he leads a simple life and has a “special” sense of humour. It says Mullah Omar, whose whereabouts are unknown, “remains in touch” with day-to-day Afghan and world events.

The US state department has a $10m bounty on Mullah Omar, who has not been seen since the US-led invasion of Afghanistan in 2001. It was Mullah Omar’s backing for al-Qaeda leader Osama Bin Laden that sparked the campaign.  It is unclear why the Taliban have chosen the 19th anniversary of his supreme leadership to publish the biography but some analysts say it may be an attempt to counter the growing influence of Islamic State in Afghanistan.

Commentators and Taliban watchers have been unable to agree on many facts about Mullah Omar, including his birth and heritage. The biography says he was born in 1960 in the village of Chah-i-Himmat, in the Khakrez district of Kandahar province, in the south of the country.