As many Nigerians would have envisaged that the President-elect, General Muhammadu Buhari, will by now concentrate more and map out a blueprint to restructure Nigeria for the better as promised during his campaign rallies, the former head of state is still soliciting for votes. 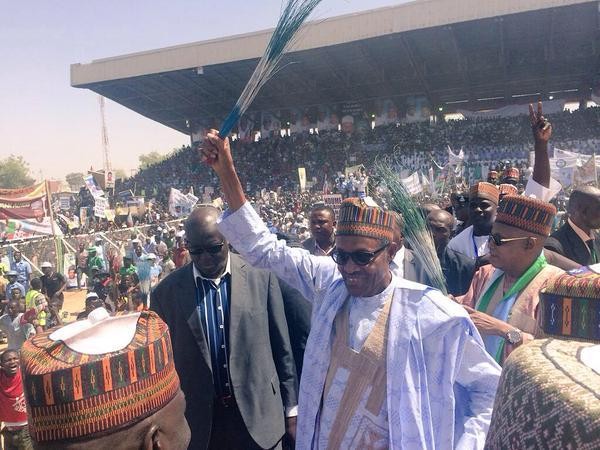 The President-elect on Sunday still find the time and energy to urge supporters of the All Progressives Congress (APC) to come out en masse on Saturday, April 11 to cast their votes for the party’s governorship and house of assembly candidates across the country.

This was made known in a statement issued in Abuja by the Director, Media and Publicity, APC Presidential Campaign Organisation, Mallam Garba Shehu, a copy obtained by Vanguard.

Buhari, who thanked Nigerians for voting him into the number office, however noted that greater challenges of consolidating the party’s electoral victory in the March 28 polls lay ahead.

The former military head of state also stated that the election of APC Governorship and House of Assembly candidates was no less important than his own victory during the presidential election.

According to him, his election should not be treated in isolation because the APC also need to clear the other levels of democratic representation across the country.

“For APC to govern effectively, its supporters should also elect the party’s candidates in the Governorship and House of Assembly elections come April 11,” he said.

The APC President-elect also used the medium to condole with the families of his supporters that lost their lives while celebrating his victory and wished those receiving treatment quick recoveries.

Buhari solicited moral support for the Independent National Electoral Commission (INEC) to enable the electoral umpire improve on its impressive performance, despite logistical challenges and other unforeseen glitches.

Meanwhile, with Lagos being the commercial hub of Nigeria and an APC controlled and owned state from the on set, Prophet Hephzibah, popularly known as ‘Baba Peculiar’ on Sunday, while speaking on the April 11 governorship polls, revealed who will emerge the state’s next governor.

Also, Southern Taraba Communities of Wukari, Takum and Ibi have threatened to boycott the upcoming governorship and state House of Assemblies elections if soldiers are deployed again for the poll.

The communities said the deployment of soldiers during the presidential and National Assembly elections frightened voters and gave room for malpractices.