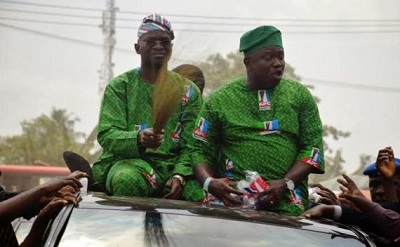 The Lagos State chapter of the Peoples Democratic Party, PDP, has accused the Governor-elect, Akinwunmi Ambode, of planning to delay the yet-to-be conducted local council elections in the state.

The Lagos PDP, it would be recalled, few weeks ago claimed that the All Progressives Congress-led government in Lagos was not interested in conducting elections into the local government councils.

A statement issued on Wednesday by the PDP spokesperson in the state, Mr. Taofik Gani, also accused the Lagos State Independent Electoral Commission of conniving with the APC to delay the polls.

The statement said, “The Lagos State chapter of the PDP has reiterated her conclusion that the APC government in Lagos is not popular amongst the electorates, especially for any grass roots elections and as such deliberately frustrating the conduct of local council polls long overdue since October 2014. The PDP has at this time accused the LASIEC as an electoral body which has exposed itself as an appendage of APC in the state and not at all independent in its decisions and administration”.

According to the PDP spokesperson, Ambode is planning to delay the polls until after one year in office.

“The delay to conduct council polls in Lagos is deliberate to eventually give undue advantage to the APC. The defence put up by the Commissioner for Local Government and Chieftaincy Matters (who was quoted to have blamed the delay in the conduct of the council polls on the Independent National Electoral Commission claiming that the electoral body has not concluded the distribution of Permanent Voter Cards and thus the polls cannot be conducted at this time) is preposterous, repulsive and clearly an indication that APC will turn out to be a party of impunity and inconsistencies”, he said.

Mr. Gani further alleged that the state’s councils were operating contrary to the provisions of the Nigerian Constitution.

“This is an aberration. Section 7 of the 1999 Constitution guarantees only democratically elected local government administration. The lawyer-governor (Mr. Babatunde Fashola) is abetting this constitutional aberration, all in the name of partisanship. This same APC clamoured for the conduct of the general elections on February 14 and 28 even when less than 40 per cent PVCs were distributed in the state. By March 28, about 70 per cent of the PVCs were said to have been distributed.

“Even President Goodluck Jonathan did not hold back the elections for that reason. The general elections have held with APC winning the state. Now because the APC knows well that it rigged the general elections in the state and that any attempt to repeat same at local government elections could inflame the state, it has decided to put the polls in abeyance claiming that the INEC has not distributed PVCs 100 per cent. The APC is unpopular and thus avoiding any grass roots election”, the PDP insisted.