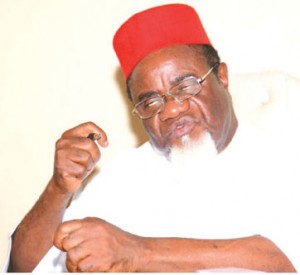 Former Anambra State governor, Chukwuemeka Ezeife has said the people of the Southeast region are not worried about the zoning policy of the All Progressives Congress (APC) which has allegedly ensured that no one from the region would hold a top office in the National Assembly.

Although the APC had denied it had zoned any positions, there have been indications in recent weeks that APC had zoned the office of Senate President to the North-Central with Senators Bukola Saraki and George Akume as the major contenders.

Other principal positions in the two chambers are being contested by the North-East, North-West and South-West. The South-South, which only has one returning member to the House of Representatives, is also angling for the office of Deputy Speaker. But the South-East, which has no returning member of APC in the Senate and the House of Representatives, has allegedly been completely left out of any of the principal officers’ positions.

However, Ezeife said: “I do not see anything wrong with what APC had done.

“What the party has done is in line with their convention. I do not see any reason why people should be worried about the fate of the Igbo.

“We are not worried. Only those who do not see us as people of destiny are worried. However, there are lessons to be learned from the outcome of things. But we are not worried because lessons have been learned,” he said.