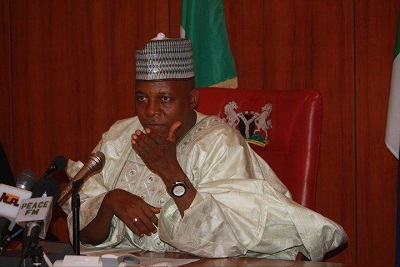 Re-elected Governor of Borno State, Alhaji Kashim Shettima, has said that the total victory of the All Progressives Congress, APC, in the state would never get into his head to the extent of playing God.

Shettima spoke in Maiduguri, the state capital, noting that God intervened to give the party victory through an overwhelming support of the people of the state.

Addressing stakeholders of the APC yesterday at the Government House, shortly after he was declared re-elected by the Independent National Electoral Commission, INEC, he said, “Let me also say, that for me as leader of the APC and re-elected Governor of Borno State, this victory will not change me from being the Kashim Shettima you all know.

“I am a constant reminder, that power can be very dangerous to the soul of its beneficiary. From my experience, when one is in power and things go his way in highly competitive elections, his first task is to fight his own mentality and resist the slightest element of negative pride. Pride can be positive when one protects and preserves his own honour and integrity.

“But negative pride is when someone thinks that he is all in all; he is the Almighty and sole fixer within his environment. It is that kind of pride that grows to a level where someone in power, begins to equate himself with God; he begins to think he is the one who determines the destiny of others and who makes decision as to who is poor, who is rich and who ascends to power. I know and believe that whoever assumes the powers of God, always crashes sooner than he expects or later on, along the ladder. Only God has the power to determine the fate of others.

“That power is absolute to Him and this is why God fights and destroys whoever assumes His powers. I am very excited with the overwhelming victory of the APC in Borno State. God graciously gave us this victory. For me, it is purely an act of God because no one would have thought that the election its self, was going to hold in Borno especially with the intrigues massively deployed by some people to stop the elections from taking place, all in their plot to overthrow an elected government under a constitutional democracy.

“It was simply God that stopped them, made sure that the elections not only held but without wild incidents that were anticipated. Yes, I have been re-elected against too many odds but I won’t play God and I do not wish to be called with names associated with such as a result of this victory.

“I will never play God and I pray to Allah to protect me and all other leaders from negative pride. The people of Borno have made us very proud but their support is also a big reminder to their huge and deserved expectation from us because like Franklin Roosevelt said and I quote, “There is a mysterious cycle in human events. To some generations much is given. Of other generations, much is expected”, Shettima said.

The governor paid special tributes to displaced persons from 16 local government areas of the state, who voted at IDP camps in Maiduguri, describing them as the real heroes of democracy given the manner they defied their agony and took active part in the electoral process.