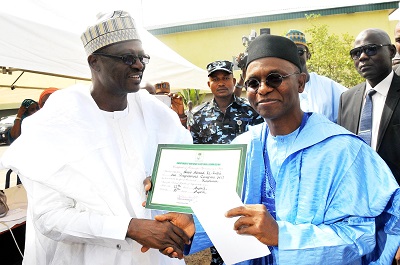 The Governor-elect of Kaduna State, Malam Nasir El-Rufai, says appointments into his government will be based strictly on merit.

He made this known Wednesday while receiving his certificate of return from the Independent National Electoral Commission in Kaduna.

The diminutive ex-FCT minister noted that the criteria for those that would form his cabinet after being sworn into office on May 29, 2015 would be based on integrity, competence and transparency.

He said, “Appointments and nominations into the incoming cabinet and government will be primarily on the basis of integrity and determined strictly by competence, capacity and capability”.

According to the governor-elect, his administration takes seriously the rebuilding of the state plagued with heavy debt, adding that all hands must be on deck to ensure that the desired change are effected without delay in the state.

El-Rufai also noted that the incoming All Progressives Congress government in the state was committed to building a harmonious society where all would live in peace.

This is just as he vowed that electoral offenders at the just concluded general elections in the state would not go unpunished.

He said this would serve as a deterrent to electoral offenders in the future.

The governor-elect said, “The APC takes seriously its responsibility to build a harmonious society in Kaduna State. We are committed to fostering a secure and peaceful environment that gives confidence to all the residents of the state to make the most of their talents.

“We are all equal partners and stakeholders in this state. There will be no discrimination in Kaduna State on the basis of gender, ethnicity or religion”.

El-Rufai also pledged to run what he described as “a listening government”, adding that “we shall be decisive in implementing our agreed agenda for change”.

He added that the APC government would hit the ground running in reforming education, health care, local government and public service sectors.

Paying tribute to those that sacrificed their lives during, before and after the elections, the governor-elect said that those that engaged in electoral offences would be made to face the full weight of the law, no matter how highly placed.

The INEC National Commissioner in charge of Niger, Kaduna, Kwara states and the Federal Capital Territory, Dr. Chris Iyimoga, presented the certificates of return to the winners of the just concluded elections at the INEC headquarters in Kaduna.