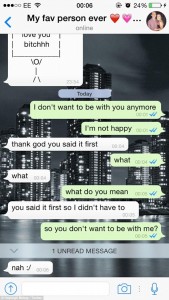 A teenage girl was left red-faced yesterday after an April Fools’ Day prank she made on her boyfriend backfired spectacularly. 17-year-old Hayleigh Mcbay pretended to dump David Clarke via WhatsApp at midnight for a joke. Read more from the Daily Mail:

But the girl from Elgin in Moray, Scotland, was given a taste of her own medicine when he pretended that also wanted to break up. College student Hayleigh texted her partner on the social media app with the words: ‘I don’t want to be with you any more. I am not happy.’ But David replied: ‘Thank God you said it first so I didn’t have to.’

Shocked, Hayleigh shot back: ‘What? What do you mean? So you don’t want to be with me?’ Soon after her boyfriend revealed that he had also been playing an April Fools’ Day prank. Seeing the funny side, Hayleigh then uploaded a screenshot of the conversation to Twitter, with the caption: ‘Well, my April Fools’ backfired :s.’

The tweet has seen been retweeted more than 12,000 times and favourited more than 11,000. While many have seen the funny side of the post, others have taken to trolling Hayleigh with hateful comments. One user wrote: ‘Biggest f****** staged load of s*** I’ve ever seen. Die.’ Hayleigh replied to the comments by tweeting: ‘Just to clarify, me and David did not plan that – but he guessed it was April Fools’ so jokingly replied. Sad that I have to specify that.’

But she stopped short of another gag – telling followers yesterday: ‘Can’t even prank my mum and tell her I’m pregnant tomorrow because she’ll be so disappointed when I tell her I’m joking.’