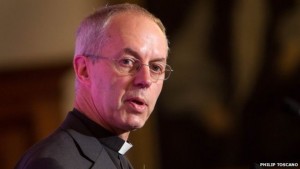 Archbishop of Canterbury, Justin Welby has travelled to Egypt for a “visit of condolence” following the murders of 21 Egyptian Coptic Christians in Libya. The group of migrant workers were kidnapped and beheaded by Islamic State (IS) militants in February. BBC reports:

The Archbishop will be meeting religious and political leaders leaders on his visit, including the Coptic Christian Pope and the Grand Imam. He has called for more support for Christians facing persecution.

In his Easter message, the archbishop highlighted the persecution of Christians in the Middle East and Africa, including the 148 victims of a Kenyan university attack earlier this month. He said those living in peaceful societies should “stand as witness” to what was happening to Christians elsewhere. BBC chief international correspondent Lyse Doucet said the Archbishop had warned that the treatment of Christians was the worst it had been since the 13th Century.