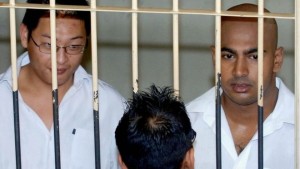 France and Australia have condemned the death penalty as executions for three of their nationals loom in Indonesia. Earlier, Australia called on Indonesia to delay executing two convicted Australian drug traffickers until corruption claims were investigated. Read more from the BBC:

Andrew Chan and Myuran Sukumaran were convicted in 2006. The two, along six other foreigners and an Indonesian, have been formally told of their execution. A French trafficker is appealing against his conviction. Under Indonesian law, convicts must be given 72 hours’ notice of execution. This means the executions by the firing squad could be carried out as early as Tuesday.

“France and Australia share the same attachment to human rights and condemn the death penalty in all places and all circumstances,” the French presidency said in a statement after a meeting between French President Francois Hollande and Australian Prime Minister Tony Abbott in Paris.

French convict Serge Atlaoui still has an appeal before the courts. France has warned of “consequences” if the execution goes ahead. Meanwhile, Philippine President Benigno Aquino appealed to Indonesian President Joko Widodo for “humanitarian consideration” in connection with the case of a Filipina woman, Mary Jane Veloso, who is also on death row for drug-trafficking offences.