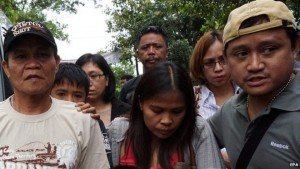 Two Australians, Andrew Chan and Myuran Sukumaran, and a Philippines woman, Mary Jane Veloso were notified by Indonesian officials on Saturday. Under Indonesian law, convicts must be given 72 hours’ notice of execution, but no formal date has yet been set. BBC was there:

The appeals process for a French national is still under way. The group is being held on the prison island of Nusakambangan.

She said she would continue to press for clemency. However, Indonesia’s government has rejected all appeals so far. Veloso’s parents, two sons and sister travelled to the island on Saturday to see her. Andrew Chan and Myuran Sukumaran were the leaders of the “Bali Nine” group arrested in 2005 while attempting to smuggle heroin to Australia. A court ruled that they had organised a nine-member smuggling operation and they were sentenced to death in 2006.