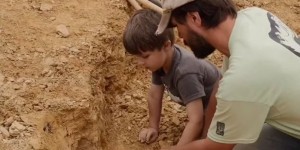 Researchers has said that the bones discovered by a 4-year-old boy next to a retail center that was under construction belonged to a dinosaur 100 million years ago. UPI has more:

Tim Brys, a zookeeper at the Dallas Zoo, said he and his 4-year-old son, Wiley, were hunting fossils next to the Sprouts grocery store in Mansfield while the retail center was under construction in September when the boy made the discovery.

“We were finding some fish vertebrae in the hillside, and then Wiley walked a little ways ahead of me and came back with a piece of bone. And I paused and was like, ‘OK, where did you find this?'” Brys told KXAS-TV.

“My dad told me it was a turtle,” Wylie told the Dallas Morning News. “But now he’s telling me it’s a dinosaur.”

Several other bones were foundnearby and researchers at Southern Methodist University’s Digital Earth Sciences Laboratory in Dallas said the bones came from a dinosaur and are an estimated 100 million years old.