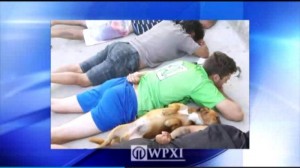 Brazilian police busting an alleged drug dealing ring said they ordered some suspects to the ground and a suspect’s dog laid down to surrender with its owner. UPI has more:

Military and civil police raided a home April 2 in Florianopolis and ordered suspected gang members to get down on the ground. Authorities said a dog accompanying the suspects initially barked at police, but laid down on its back when its human accomplices complied with the police’s orders.

“The officers had been observing the gang for some time and when they arrested them they recovered a substantial quantity of marijuana and cocaine, as well as weighing scales, guns and ammunition,” police spokesman Filippo Valdez told Central European News. “There was a male dog that was barking when officers burst onto the scene but when it saw its owners obeying the command to lie down, it ran over and laid down as well.”

Two men were arrested in the operation, but the dog was later released from police custody. Police said money and weapons were seized from the home. Dog trainer Barnie Rico said laying on its back was the dog’s way of showing submission.