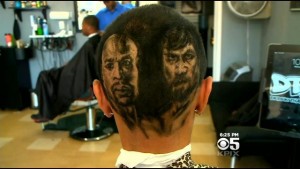 A California “super barber” is drawing attention for his ability to cut realistic images into the hair on his customers’ heads. UPI has more:

Derek Hernandez, 23, a barber at Ajja’s in Antioch, is drawing national attention for his ability to cut and color realistic portraits including Golden State Warriors star Stephen Curry into the hair on customers’ heads. Hernandez, aka Derek the Barber or DTB, said his latest creation, the heads of boxers Floyd Mayweather and Manny Pacquiao to promote their upcoming fight, took about two hours to complete and cost $150.

“You know, the fight’s coming up, so I decided to give this a try,” Hernandez told KPIX-TV. The barber said creating hair art is different from drawing on paper. “More like erasing, than drawing it on there. It’s like you’re working with a black piece of paper and a white pencil,” he said.

“When it started off, it wasn’t that easy,” Hernandez said. “I was kind of scared that I was gonna mess somebody up.”Hernandez is slated to compete against fellow “super barbers” on the May 1 episode of CW show Cedric’s Barber Battle.