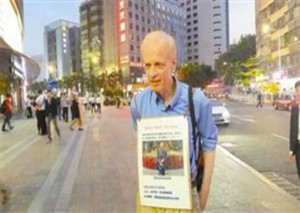 The man, who was identified as Jake, said that he met the woman through a dating website almost a year ago, and he liked her instantly. The woman, who goes by the name RILI, told Jake that she is 45 years old, divorced and she works in a garment factory in Shenzhen.

For the past 11 months, the two have exchanged more than 300 messages via the dating website. The two exchanged love poems and both said that they love each other. However, the two never exchanged phone numbers or any personal information. After RILI stopped responding to his messages on the dating site, Jake had no way to contact her.  After not hearing from the woman for 10 days, Jake decided to travel to China, without knowing her real name, phone number or her address. When he arrived at a hotel in Shenzhen, Jake made a card with a photo of the woman, and hung it around his neck, seeking information from anyone who would help him.

Over the past two weeks, he has been walking around with the sign, hoping that people can spread the photo on social media to help him locate the woman.  “The people of Shenzhen are very friendly. They took my photo and posted it to social media,” Jake said.  Jake said that he was is “very grateful” for the support he received.