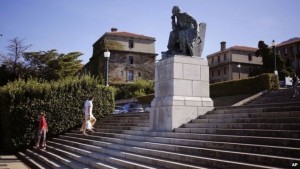 The University of Cape Town (UCT) has voted to remove a statue of British colonialist, Cecil Rhodes that had become the focus of student protests. BBC was there:

The monument will be taken down from the campus on Thursday and stored for “safe keeping”, UCT’s council said. Students have been campaigning for the removal of the statue of the 19th century figure, unveiled in 1934. It was smeared with excrement last month.

Other monuments to colonial-era leaders have also been recently vandalised. The campaign has triggered a backlash. On Wednesday, crowds of white South Africans rallied at statues of Paul Kruger in the capital Pretoria, and Jan van Riebeeck in Cape Town, saying they were part of their heritage and should not be targeted.

South Africa’s media has been debating how the country should deal with its troubled past following the decision to remove the Cecil Rhodes statue. “Symbols aren’t inanimate objects, they are powerful devices that must be removed if they pay homage to a dark and oppressive past,” argues the Mail & Guardian.

But writing in the News24 website, Vusi Kweyama warns against “erasing” history: “We must teach our children how to remember in a way that is empowering and educational.”