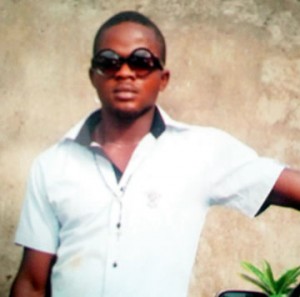 A 26-year-old man, Wisdom Okafor, has been killed after a scuffle with a car wash attendant, Monday Ekwekuba, in the Ojokoro area of Lagos State. PUNCH Metro reports:

PUNCH Metro learnt that 38-year-old Ekwekuba, an indigene of Imo State, attacked the victim with a stick before chasing him into the path of a speeding vehicle after he saw him (Wisdom) in his girlfriend’s house. Wisdom was reportedly crushed to death. The incident happened on Clem Street in the Ijaiye Ojokoro area.

Our correspondent was told that Wisdom was a casual friend of Ekwekuba’s girlfriend, and was preparing for JAMB examination when he was killed. The police from the Ojokoro division were said to have arrested the suspect, while the corpse of the deceased was taken to a mortuary in the area. The victim’s elder brother, Celestine, told PUNCH Metro that the police had earlier arrested him accusing Wisdom of being involved in a fight.

He said, “On Sunday, March 22, around 10.30pm, the police came with a lady to my house and asked for my brother. They said he was involved in a fight and had injured a man named Monday (Ekwekuba), who had been hospitalised.“I told them my brother went out to see a friend and had yet to return to the house. They said they would arrest me until I was able to produce my brother.“I was detained and later they asked me to pay N10, 000 for Monday’s treatment, which I did.

“They then asked how I would produce my brother, and I decided to call him in their presence. His phone started ringing in the pocket of one of the policemen. The officer said the phone belonged to the man in the hospital, who had just died.”