Home News Feed Checkout Photos Of Where Jonathan Will Be Living At Otuoke After Vacating...
Facebook
Twitter
WhatsApp 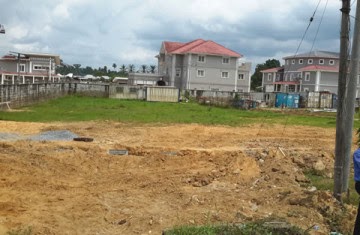 President Goodluck Jonathan will leave the Aso Villa after May 29 for Muhammadu Buhari. Punch’s Simon Utebor was at Jonathan’s Bayelsa State-country home where he is expected to retire to.

The air around the sprawling estate is amazingly cool. Looking around, the answer to this quickly dawns. The estate is opposite a creek, and the rolling breeze keep coming.

It is Otuoke, the home town of Goodluck Jonathan. Otuoke is a small island community in Ogbia LGA. And there, the estate sprawls over a large expanse of land contrasting sharply with its rustic surrounding. It is said to belong to Jonathan.

On the long road to the gates, soldiers and members of other security agencies, apparently on sentry duty, walked on the grounds. The overall air suggested guarded and protected serenity. No one needs the gift of clairvoyance to understand they are approaching a restricted zone. 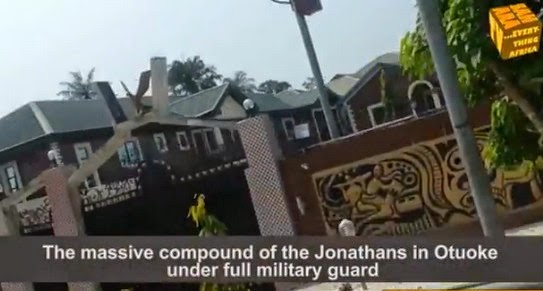 Behind the gates, shoving their heads above the walls are no fewer than eight different structures apparently for different purposes: recreation, security posts and guard quarters. A visitor to Otuoke will not be penalised for calling the place a fortress.

Activities in this place, a source within said had been at a lull until a couple of weeks ago. And it is largely believed that come May 29, after the expiration of his tenure, Jonathan would relocate to the place.

As if the President had the premonition that he would not live in Aso Rock beyond 2015, he was reported to have begun acquiring properties adjacent his sprawling country home by late 2013.

Jonathan acquired properties on an area which runs to about seven acres which were around his mansion. The place was thereafter expanded to encase the mansion while new structures were erected round it.

It was gathered that compensation was paid to the owners of these properties to enable them relocate.

It was learnt that Jonathan, after acquiring those buildings in 2013, engaged the services of a construction company, Jiito, to expand the estate to accommodate his new acquisition.

Today, Jonathan’s mini-estate, which overlooks a creek that links Otuoke to other coastal communities of Bayelsa, is a cynosure of all eyes.

A visit to Otuoke showed that Jonathan’s mansions, which had been under construction and reconstruction in the last 10 years are now ready for habitation. The area sit on is best described as an island.

It was learnt that before now, each time the President visited Otuoke, he usually slept in his wife’s (Patience) castle which is directly opposite the Federal University, Otuoke.

It was also learnt that the Jonathans own the choicest properties in Otuoke. The President was said to have built a two-storey building each for his mother and father opposite his own.

A source in the area said: “I overheard some of the workers saying that they had been instructed to finish the last building before the second week of May. I think it is because the President is returning home.