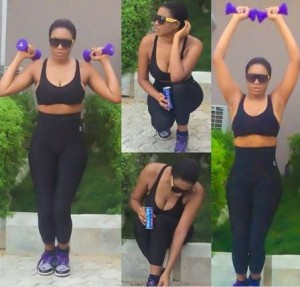 Famous Nollywood actress Chika Ike, who claims she has been celibate for 5 months has gotten herself a new deal.

Chika Ike happily announced that she has renewed her deal with energy drink brand, Bullet Energy.

She announced this today, April 30, 2015 on her Instagram account when she posted a picture of herself working out early in the morning.

“Good morning lovelies. “My people say when a road is good you’ll pass it more than once” Bullet energy drink renewed for 2 years. My team rocks  #mymanagerrocks #bulletenergydrink” wrote the popular actress.

Chika Ike became the brand ambassador for the energy drink in 2014.

Share
Facebook
Twitter
WhatsApp
Previous articleTerry G To His Babymama: “I Am Blessed To Have You”
Next articleCheckout The Masculine Yet Hot Body Of Chichi Igbo [PHOTOS]
- Advertisement -