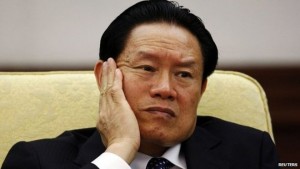 Mr Zhou was, until his retirement in 2012, one of China’s most powerful men. He headed the Ministry of Public Security and was a member of China’s top decision-making body. Once Xi Jinping took over as president in 2013, however, he was put under investigation.

A formal probe was announced in July 2014, after months of rumours, and he has since been expelled from the Communist Party.  Mr Zhou’s case had been sent to a court in Tianjin, a northern port city, Xinhua news agency reported. The head of China’s top court said last month he would have an “open trial”, though no date has been announced.