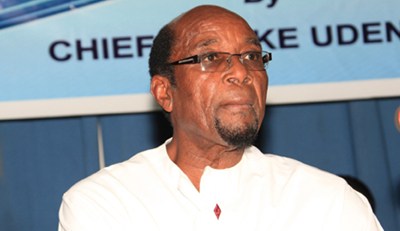 The burial of Senator Uche Chukwumerije has been slated for May 22, his family has officially announced.

The announcement was contained in a four paragraph letter the late senator’s family wrote to the Senate entitled: “The passing away of Senator Uche Chukwumerije”.

Senate President, David Mark, read the letter signed by Che Chidi Chukwumerije, on behalf of the family on the floor of the Senate yesterday before lawmakers adjourned plenary as a mark of respect for their departed colleague.

The letter reads, “With total submission to the will of God, I will like to use this opportunity to inform you Distinguished Senate President and all the members of this Distinguished Senate of the demise of your friend and colleague, Senator Uche Chukwumerije, the Senator representing Abia North Senatorial District in the 7th National Assembly.

“Senator Uche Chukwumerije was born in Ogoja in the present day Cross River State on the 11th of January 1939.

“His was a life dedicated to public service. From his early days in the 1960 with the likes of the West African Pilot, the Nigerian Broadcasting Corporation and the Daily Times right up to the time of his first election into the Senate in 2003, Senator Uche Chukwumerije has consistently played key roles in shaping the course and character of our beloved country.

“A three time ranking Senator in the 4th Republic, a minister of the Federal Government in the 3rd Republic, the National Publicity Secretary of the Peoples’ Redemption Party (PRP) in the 2nd Republic, the Biafran Director of Propaganda in the Civil War and an ardent socialist, activist and political commentator in the 1st Republic, Senator Uche Chukwumerije’s life and activities coincided with major movements in the Nigerian history.

According to the burial arrangements released by the family, the Night of tribute will be on Wednesday, 20th of May 2015 at a venue to be announced in Abuja, Wake keep, Thursday 21st of May 2015 at the Chukwumerije Family Compound Ngodo -Isuochi, Abia State.

Meanwhile, Mark has assured that the Senate would give the Senator, who until his demise was the Chairman, Senate Committee on Education, a heroic burial.