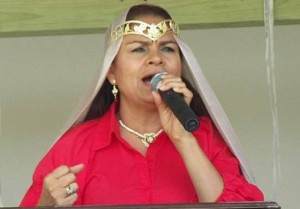 A woman, who works as a pastor at a church, was arrested on charges of causing serious injury to a child after allegedly starving a young boy to death in order to rid him of demons, police in Texas said. Odd News Blog reports:

Balch Springs Police said that they arrested 49-year-old Araceli Meza, after holding a resurrection ceremony shortly after the boy’s death to try to revive him. His parents took the boy’s dead body to Mexico for burial. An anonymous tip about the ceremony led to the investigation. Meza was charged with injury to a child causing serious bodily harm.

Her bail was set at $100,000. Witnesses told police that Meza and the boy’s parents thought he had a demon inside him, and that fasting was a way to save him. The child was not fed for about 25 days. They just gave him some water, which ultimately caused the child’s death. During a ceremony in church, an attempt was made to resurrect the child by performing a ritual.

By the time police arrived at the boy’s home, the parents already left to Mexico. A witness said that the mother of the child was advised that it was the will of God to starve the child.