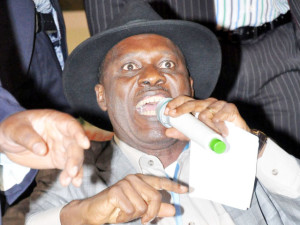 A former Minister of Niger Delta Affairs, Elder Godsday Orubebe, has apologized to Nigerians for his show of shame at the presidential election results collation centre in Abuja on Tuesday.

Orubebe said he sincerely regretted his action as he allowed his emotion to overcome his sense of reasoning.

He also pleaded with Niger Delta youths not to perpetrate violence over the outcome of the election, which produced Maj.-Gen. Muhammadu Buhari (retd.) of the All Progressives Congress as winner.

He explained that politics is an emotional thing and that was what happened but he said he would not want such a situation to happen again.

The former minister had disrupted proceedings for about 20 minutes while also accusing the Chairman of the Independent National Electoral Commission (INEC), Prof. Attahiru Jega, of partiality.

Orubebe, who expressed his regrets during an interaction with reporters at the National Collation Centre in Abuja, also commended President Goodluck Jonathan for his statesmanship in congratulating Buhari on his victory.

According to him, Jonathan’s acceptance of defeat was the right thing to do.

He said: “Election is a passionate thing and I really regretted what took place this morning. I was unnecessarily pushed by Jega to get to that level and I did make that statement.

“I want to apologise particularly to young Nigerians that look up to take politics as a career to say that what happened was not intended to cause them any embarrassment.

“To Nigerians generally, I regret my actions as even an elder in the Church, and a leader, the young men expected to see a lot from me and I believe that if there was any disappointment they got from me I apologize to Nigerians and to the youths of this country”.

Orubebe, who looked sober, asked Niger Delta youths not to take the laws into their hands on the outcome of the presidential election.

“God has a reason for bringing us together in this geographical area called Nigeria. We should live as one and if we are given responsibility to do anything, we should fair to all and treat everybody equally. But I believe that tomorrow is another day. If today is somebody else turn, tomorrow can be another person’s turn.

“So I believe in the unity and peace of this country, I believe the young ones that are coming up will learn from us the way these things are handled. We have seen what the president did and we are also following in his footstep. So I speak to them to embrace peace, to look forward to see another great day”.

On President Jonathan’s show of good sportsmanship, he said: “Two things are in place. The president is the president of everybody, whether he contested with Buhari or not. He has seen the results displayed everywhere and it is only one that is remaining and he has also seen that even if he wins that one the figures as presented by INEC keeps Buhari on lead. As a statesman and as a president, he has done what he should do”.

Orubebe, however, was not categorical on whether PDP will accept the results of the presidential election or not.

He also said the PDP agents had a duty to submit a report of their observations at the National Collation Centre to the headquarters of the party where leaders will make an appropriate statement.

‎He said: “I cannot decide, for PDP is a large family, we are sent on an errand you go and be an agent, see what is happening there and come back to report to us. We will go and report to the party and the party will take the necessary action it has to take.

“The rest is for PDP as a party to get briefing from us and make a statement. You remember what happened in Ekiti recent governorship election, the governor congratulated his opponent and the party went back and said this is what they have seen. The candidate is not the party, he is a candidate and he has acted very well as a statesman, and as the president, the father of all, for us we are agents to be here to see what transpired here and give report to them”.