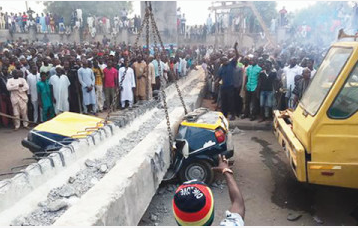 The Kano State Commissioner for Works, Housing and transport, Alhaji Abba Kabir Yusuf, has described as inaccurate, media reports that a pedestrian bridge collapsed in Kano, saying the fact of the matter was that a concrete beam slipped and not the entire bridge collapsing.

Speaking to newsmen in his office Tuesday, the commissioner said what happened was an accident which happens on many construction sites.

He, therefore, absolved the local construction firm of any blame as there was no evidence of substandard work that caused the slip of the concrete beam which killed three people.

Yusuf stated that the incident was the will of Allah, who destined for the deceased to die the way they did.

Yusuf added that there were four similar concrete beams already mounted on the pillars of the pedestrian bridge and they had been there for days; noting that the last one was mounted and technical work was ongoing to tie it up when the taxi encroached and accidentally, the beam fell on it.

The commissioner pointed out that the construction company has done quite a number of quality construction works on behalf of the State Government including the same Sheikh Jaafar road, where the pedestrian bridge was under construction.

He insisted that only biased minds would call for the technical audit of all the bridges that were constructed and already handed over to government, adding that what should be taken into consideration is the fact that the pedestrian bridge in question is still under construction.