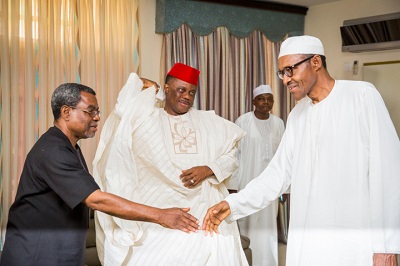 Governor Willy Obiano of Anambra State has appealed to the president-elect, Gen. Muhammadu Buhari (retd.), to help address the problems affecting the South East, and to appoint people from the region into key positions in his government regardless of their political affiliations.

The governor stated that the region will support the government of Mr. Buhari, despite the outcome of the March 28 presidential election, which saw him and his All Progressives Congress, APC, losing woefully in the South East.

Mr. Obiano made the appeal Friday when he visited the president-elect at his residence in Abuja.

The governor said he believed Mr. Buhari would not limit his search to APC members whenever he begins to appoint people into his government.

“I suspect that the President is not going to give appointment to only people from his party because everybody would support him and so he has to consider people from the other parties so that we can all embrace the change”, he said after emerging from a brief meeting with Mr. Buhari.

The governor said he had pleaded for the consideration of people from Anambra state and the South East in general when the president-elect settles down to make appointments.

“We also pleaded in the area of appointment for the people of Anambra and of course for people from the South East be it Ministerial, Ambassadorial and what have you”, he said.

The Anambra governor said he also used the occasion to congratulate Mr. Buhari on his victory.

“Well, I came to congratulate His excellency, the President – elect, on his victory and I am also here to reassure him that Anambra and the south East would support him.

“I also pleaded with him on some pressing problem that are of importance to the south east like the second Niger bridge and some of the federal roads”, he said.

Denying the speculation that his visit had anything to do with jumping ship from APGA to APC, the Anambra governor said, “Well, I am a very focused governor.

“Under my tenure, I brought change in the area of security to Anambra State and I will always support things that would bring change to improve on the well-being of Ndi Anambra and Nigeria as a whole”.