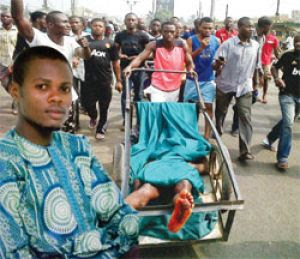 A Lagos High Court sitting in Igbosere on Thursday adjourned to June 25, the hearing in the case involving a dismissed Divisional Police Officer (DPO), Segun Fabunmi, accused of murdering a protester, Ademola Daramola.

Mr. Fabunmi was alleged to have committed the offence during the January 2012 fuel subsidy protests in Lagos.

Justice Olabisi Akinlade ordered the adjournment to enable the prosecution team led by E.I. Alakija to file its final written address and for the defence team led by T.J. Odeshola to file its reply.

“The matter is hereby adjourned to June 25 for filing of final written addresses”, Mr. Akinlade said.

Mr. Fabunmi, the former DPO of Pen Cinema Police Station, Agege, a suburb of Lagos, had served in the Nigerian Police Force for 28 years.

He denies shooting Daramola in 2012.

Mr. Fabunmi claimed in his testimony before the court that he along five junior officers had responded to a distress call at the Yahaya Abatan Junction, Ogba, Lagos State on the said date.

He said on getting to the scene of the incident, some hoodlums tried to dispossess him of his weapon leading to an unexpected discharge of ammunition which inadvertently killed Daramola.

“I was the only one armed on that day. I was attacked by the mob which surrounded me and tried to collect my weapon from me.

“The junior officers who accompanied me on that day ran away for dear lives and during the struggle with the mob, I heard my gun expel a bullet.

“My Lord, I never shot at anyone and may the soul Ademola Daramola rest in peace”, Mr. Fabunmi said.

Five prosecution witnesses have however testified that Mr. Fabunmi chased Daramola and shot at him.