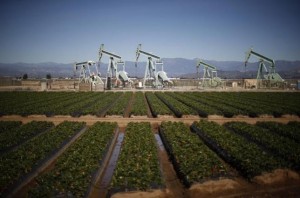 Brent crude oil rose above $63 per barrel on Thursday on heightened concerns over the security of Middle East supplies as civil war escalates in Yemen. Read more from Reuters:

Warplanes from a Saudi-led coalition struck targets in and around the Yemeni cities of Aden and Ibb despite indications from Riyadh that its campaign against the Iran-allied Houthi movement would be wound down. Yemen is a tiny oil producer but the Bab el-Mandeb Strait on its southern coast controls access to the Red Sea, Suez Canal and the ports of western Saudi Arabia, the world’s biggest exporter of crude.

The global oil market is heavily oversupplied, with the latest estimates putting production by the Organization of the Petroleum Exporting Countries at almost 2 million barrels per day above demand for its oil in the first half of this year. U.S. government data on Wednesday showed domestic crude stockpiles rose by 5.3 million barrels last week, well above a forecast 2.9 million barrels, to a record 489 million barrels. [EIA/S]