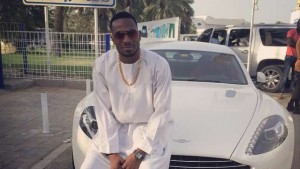 I recall reading this stupid rumor weeks ago about D’banj being arrested.

Well, D’banj’s team have come out to say that their artiste does not owe anybody, and he was never arrested concerning any court case.

In an interview with Tribune, D’banj’s manger, Danku said that the recent negative reports concerning his client are from “compromised bloggers and print media men.”

“It has come to our notice that such ugly stories are only published when D’Banj is not in Nigeria. He travelled on Wednesday and this arrest story went viral on Thursday. That has been the trend. We know those who plant these stories. They are close to D’Banj. But the truth is that D’Banj has gone into a business deal with some people who eventually ruined his business” he said.

“When he decided to arrest these guys, they resorted to using some compromised bloggers and print media men to attack  him. Professionally, these guys should have sought D’Banj’s views, but they didn’t do that” he further said.

“My artiste does not owe anybody and neither was he arrested by policemen as reported months ago” stated the manager.