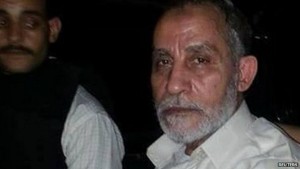 An Egyptian court has confirmed the death sentence on Muslim Brotherhood leader Mohammed Badie and 13 others for planning attacks against the states. BBC was there:

The court also jailed a US-Egyptian citizen and 36 others for life. Badie was sentenced in March and is embroiled in several other trials. The sentences are subject to appeal. Hundreds of people have been sentenced to death in a crackdown on the Brotherhood following the removal of President Mohammed Morsi in 2013.

However, so far only one death sentence has been carried out. The court session was broadcast live on TV. The sentences are the final phase in the trial which saw Muslim Brotherhood leaders charged with encouraging members of the group to confront the state and spread chaos following the dispersal of protests in 2013.

They were handed down following advice from Egypt’s highest Islamic legal official, the grand mufti. Two of the defendants were sentenced to death in absentia. US-Egyptian citizen Mohamed Soltan was sentenced to life for supporting the Brotherhood and transmitting false news. The son of Brotherhood preacher Salah Soltan, he has been on hunger strike for months and has received attention from local and international human rights organisations.